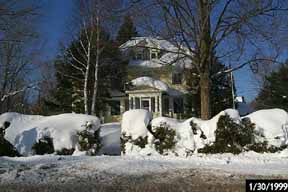 Chassell Township is located in Houghton county in the Upper Peninsula of Michigan, approximately eight miles south of the Houghton-Hancock area. The Township's east boundary is formed by Portage Lake, the Portage River and Lake Superior's Keweenaw Bay. The Township office is located in the Bank across from the Post Office on US-41. The mailing address is PO Box 438, Chassell, MI 49916 and may be reached by phone at 906-523-4000. The Township is governed by a five member board consisting of a supervisor, clerk, treasurer and two deputies.

Following are some Chassell Township statistics from the 2000 census:

The community of Chassell, located on Pike Bay in the North Western part of the township, is the main concentration of population. The community is predominantly residential with a number of homes located along the South and West shorelines of Pike Bay. Immediately North and East of town along Pike Bay is a concentration of year-round and seasonal homes and cottages, some of which are rented to tourists in the summer.

The commercial character of the community is primarily roadside and composed of unique retail shops, restaurants and service establishments. Within the town is a large tract of waterfront property that has been turned into a Township Park.

A new K-12 school was constructed in 1991 just East and South of town along US-41. The old High School and Elementary School were sold to the Chassell Historical Organization for a historical/cultural museum.

The only other concentration of population in the township is Portage Entry, a former fishing village located where the Portage River enters Keweenaw Bay. The fishing industry declined in the 1950's and today the village is primarily year-round and seasonal homes.

Chassell Township has a variable topography with ridges and valleys which generally run southwest to northeast. Most of the land is quite flat and is well suited for agricultural purposes, and remains a productive farming district today. The soils and climate are especially well suited for strawberries, and most of the approximately 650 acres planted in Houghton County are located in Chassell. Sponsored by the Chassell Lions Club, the Copper Country Strawberry Festival takes place in Chassell's Centennial Park in early July.

Chassell is home to many valuable and unique businesses.